~ Two of my favorite things are knitting and reading and I love sharing my projects and current reads here. I would love for you to join me over at Ginny's every Wednesday to share a single photo of what you are knitting (or crocheting) and reading too! Share your photo on your blog, on Instagram (#yarnalong), or on Flickr. Leave a link below to share your photo with the rest of us! ~

I'm trying not to miss out on the Yarn Along today, trying to get back into a blogging habit but it means I'll have to go out to my car to get my knitting project! 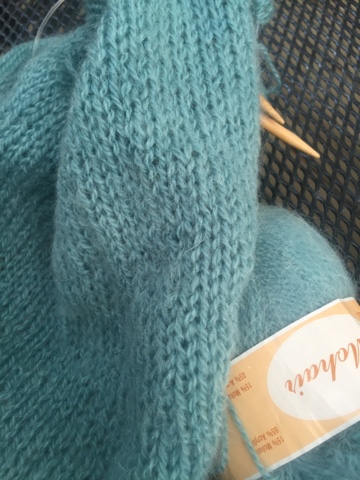 This week, I'm working, sporadically, on a Simple Shrug that I can keep in the car for those spare minutes during day trips. It's very simple, perfect for the car. And since I'm doing a lot of hand sewing in the house, the car is the best place to keep my current knit!

The yarn is an mohair acrylic blend that I recently acquired for free. (Someone donated a huge amount of old yarn for our AHG troop's Warm Up America project, but can use only acrylic for that. These 2 skeins of what looks like a really old label are actually very nice. I'm enjoying the project and I love the soft green. Winning! 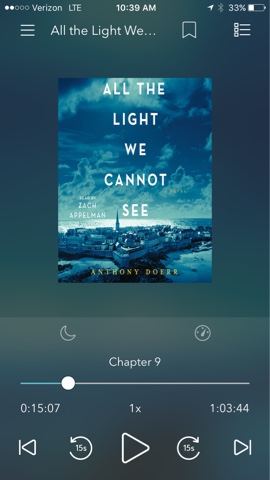 I finished listening to All the Light We Cannot See the other day. I knew absolutely nothing about it, but I requested it since it has been so popular in the past year. Pulitzer Prize winner, eh? I did enjoy the story---WWII has always been a favorite subject---but I have a couple of bones to pick with the author. First, I'm not a fan of verbizing nouns. (I know, I just did it.) Ugh. The whole book is full of nouns-turned-verbs in an effort to make the language more colorful and picturesque. It seemed very elementary to me, and don't editors care about that sort of thing? Or do they just chalk it up to "style"? It was a constant distraction from the story as I would hear it and then start thinking about I would re-write the same sentence to create the same scene without using made-up words. Then I had to rewind....it got old. Second, it felt as if there were a half-dozen or more epilogues at the end. I like a story to be wrapped up, and I love knowing what happened to the main characters, but this seemed excessive. It was as if he wasn't sure where or how to end the book and his editor didn't bother to say..."Here. This is a good spot to wrap it up!"

I don't consider myself a fabulous writer, by any means, but some of the stuff that makes it past editors these days in books or newspapers boggles my mind. Am I the only one who feels this way?

I'm looking forward to seeing what everyone else is reading! I'm sure that I chose that book based on seeing it in many Yarn Alongs. Yarns Along? Editor? ;-)

Email ThisBlogThis!Share to TwitterShare to FacebookShare to Pinterest
Labels: books, Knitting, yarn along

Here is Meg's dress that I finished on Sunday night. I love the Alabama Chanin designs which are so customizable! Meg wanted a simple dress, and this dress, while it has 6 gores, is pretty simple. The only embellishment is the embroidery on all the seams. She didn't want any appliques which are an Alabama Chanin trademark. 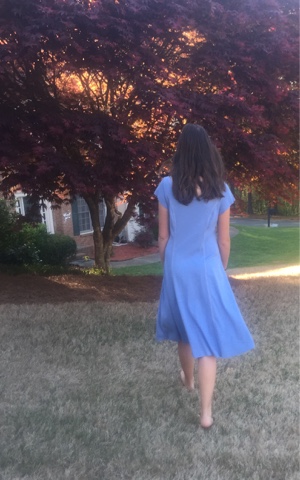 The big problem we have with dresses is that my Margie has long legs and the already-too-short styles in the stores are even worse on her and not at all appropriate for Mass (or anything else, in my opinion). When I cut out this dress, I added an extra inch or so---using the marking for the next size up. 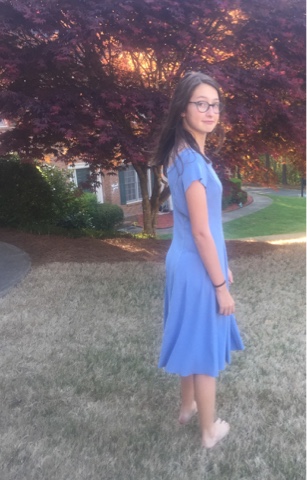 She chose the blue because she loves Cinderella, and we added the cap sleeves for Mass and the the princess look. 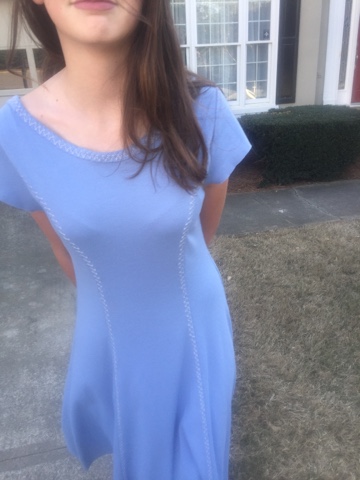 She also chose the pretty rosebud stitch in silver floss for embellishment. It's lovely, but it took 3 days of intensive stitching and binge-watching! All the seams are hand-sewn with very sturdy button-craft thread, and  assembly took a little more than one full day. It's much faster to whip together on a machine, but the simple running stitch was pleasant to do and you don't run into any issues of accidentally stretching the material as you sew. I found the sleeves much easier to do by hand than by machine! 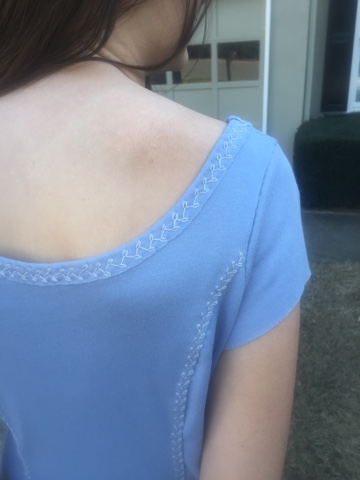 It's funny that so many hours go into the assembly and embellishing, but then no hemming is required on the sleeves or skirt! Such a fun project! I have a couple of dresses of my own that I'm also working on now, and more material to make her another skirt.

Email ThisBlogThis!Share to TwitterShare to FacebookShare to Pinterest
Labels: sewing

I'm so late to the link-up this week. I thought I was doing well by uploading the photos on Friday, but somehow the post never got written. Better late than never! Life can always use a little pretty, happy, funny, and real, no matter what day of the week it is! (ha! missed the linkup!) 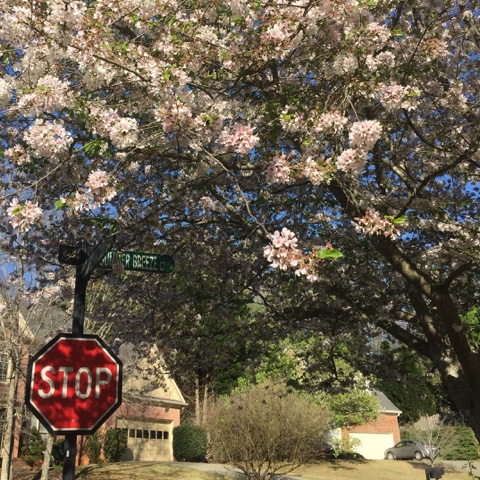 This corner in my neighborhood is the Most Beautiful. I've probably told you about it before, but there are 5 large cherry trees there and it's magnificent. I often wonder how the neighbors would feel if I brought a blanket and a book and camped out for the afternoon to read underneath them! 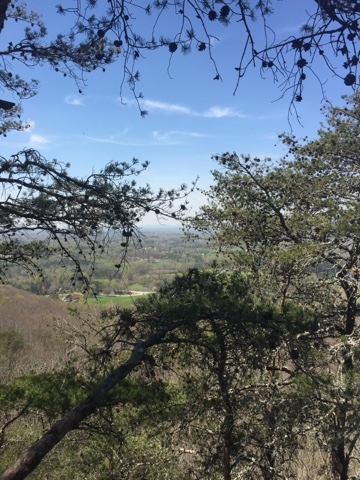 On a spectacular spring day we had a tennis match near here, so Pip wanted to go early and hike up to the "Indian Seats". We had gotten a late start, so we had to hike pretty quickly the 3.8 miles round trip. I spread out a blanket on the grass at the tennis match and promptly fell asleep! 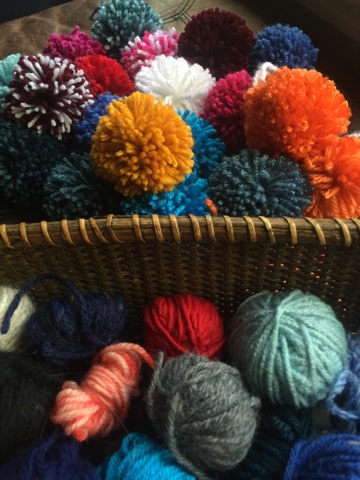 Between knitting projects, I've just been making pompoms like crazy! They're so much fun, and the oblong basket is now on my kitchen table as a centerpiece of pompoms. LOL. 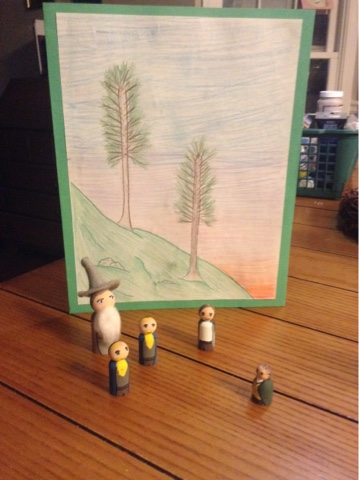 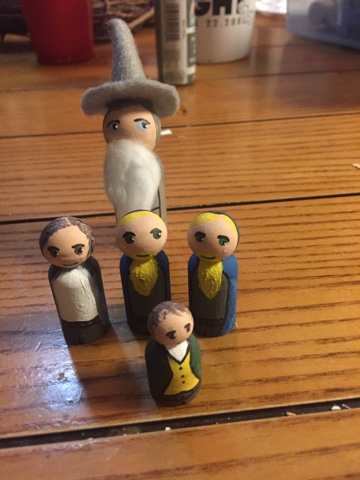 Meg has been reading The Hobbit in school, and they had to paint peg dolls as some of the characters and illustrate a particular scene. She started this project pretty much at the last minute and spent a full day painting these guys. Who are they? Can't you tell? Gandalf in the back, Thorin Oakenshield, Fili & Kili in the middle, and Bilbo in the front. She did such an amazing job that I want to order some large peg dolls and paint little wooden saints with her. 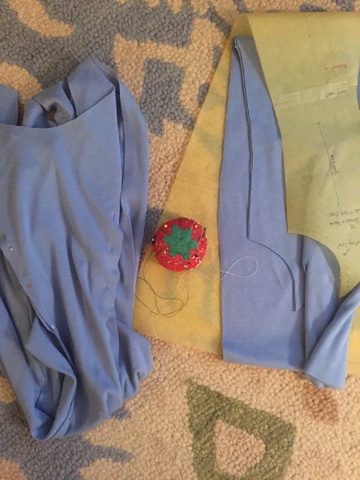 Last week was spring break, so we celebrated by having Pippo's wisdom teeth extracted! That kept me home most of the week, and not a little bit bored. I started knitting a shrug which I'll show you later this week (maybe!), but it just wasn't keeping my attention.

I got an irresistible urge to sew, instead of knit, while making pompoms. It's crazy how that happens around Easter when it's really too late to make anything like an Easter dress! I wanted to make Meg an Alabama Chanin jersey dress, and she picked out Cinderella blue for her fabric. It's completely handsewn-----com.plete.ly-----and I just finished the 15.6 feet of embroidery on the princess seams last night. I'm so pleased with how it turned out. I can't wait to show you!

May Nothing Disturb You! ---St. Teresa of Avila

May nothing disturb you.
May nothing astonish you.
Everything passes.
God does not go away.
Patience can attain anything.
He who has God within,
does not lack anything.
God is enough!

"Have patience with all things, but chiefly have patience with yourself. Do not lose courage in considering your own imperfections but instantly set about remedying them — every day begin the task anew."

Remember, O most gracious Virgin Mary, that never was it known that anyone who fled to thy protection, implored thy help, or sought thy intercession was left unaided.
Inspired by this confidence, I fly unto thee, O Virgin of virgins, my mother; to thee do I come, before thee I stand, sinful and sorrowful. O Mother of the Word Incarnate, despise not my petitions, but in thy mercy hear and answer me.
Amen.